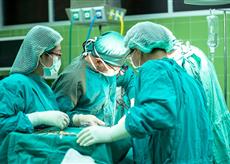 A woman with a congenital malformation gave birth to a baby boy on Thursday, after receiving a uterus transplant from her twin sister. The baby was born in Bologna, Italy, to a Serbian woman living and followed up in Italy. The procedure was carried out at the University Children’s Hospital in Belgrade, Serbia, by Swedish doctor Mats Brännström, who specialises in this type of transplant.

As the two sisters are identical twins, immunosuppressants were not required. The baby was born by caesarean section at Sant Orsola University Hospital in Bologna, Italy.