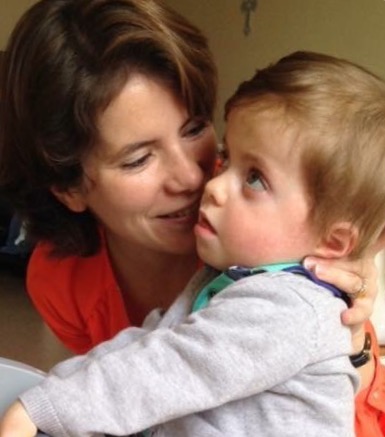 Gaspard is a 2-year-old little boy. He is suffering from the genetic neurodegenerative Sandhoff disease, which is gradually killing him. For Généthique, his mother Marie-Axelle, tells us of the way she accompanies him by preserving his consciousness of existing and of the dignity of which he is the depositary.

From what moment, or until when does a person have his dignity? I remember this true story I read about a few months ago. A nurse tells the story of an event that occurred in the emergency services of a hospital. An old man turns up, who has hurt his thumb. He asks her to be quick at treating him. He has to leave very soon because, every day, he goes off to visit his wife, suffering from Alzheimer. To the nurse, who looks surprised, he says: “She never recognises me, but I still know who she is”… These words resounded in me. It also sums up my experience with Gaspard.

Gaspard helped me to progress a lot concerning my way of apprehending dignity. Currently, at just over two years old, his consciousness degrades a bit more every day. He is not always present to what is going on around him. He is no longer conscious of his body. He no longer knows where its limits are. I wonder more and more whether he realises I am beside him. Gaspard can no longer see, and of his four remaining senses, he mainly uses two: hearing and smell.

Gaspard, my sick little boy, totally invalid, can no longer show me he has dignity. Totally dependent, non-communicative, he cannot put forward the value of his own life and it is for us, for me, to take on that role and find the means, sometimes very concrete, of showing him the importance of his life, of his existence. And in this context, physical stimulation is primordial: by putting his socks on for him, it is possible that I may hurt him, but it is because “you feel that I am touching you, that you know that I know that you exist”.

Gaspard is two and should be going through a phase of rebellion. However, he is on the contrary completely dependant, left to endure what I decide for him. So, in order to let him make his own decisions, I have chosen to put him in font of a MCQ (multiple choice questions). In the end, it is always me who decides and imposes my choice. But I invite him to make his own choice himself… even if we don’t agree and he won’t be able to tell me so. It is just another way of enabling him to exist, of showing him he is someone, and an important someone, simply because his heart is beating, simply because he is a little man, and that, even sick, he is alive.

With Gaspard, I understood that it is the people around a person that enables that person to become conscious of his dignity. Indeed, indignity no longer comes from the person himself, but from the way other people see that person. As a matter of fact, his exterior dignity, Gaspard’s visible dignity, depends a lot on the way we look at him: He needs to be reassured about the value of his life. Whatever his state.

I cannot help thinking of this sentence of the Petit Prince from Saint-Exupéry: One only sees properly through the heart. What is essential is invisible to the eyes”. And I know that life is worth living, despite any dependence, whatever the pathology we suffer from, whatever the state we may be in. And when we stop “stimulating” a person’s dignity, we condemn that person. Euthanasia thus becomes an easy remedy when the suffering of others becomes the reflection of our own pain: “I cannot stand to see you suffering, it is too difficult to get you to live, I would rather you died, because I don’t know what you are thinking or if you are in pain”. By wanting euthanasia we believe we are suspending and stopping life, when what is really needed is even more of it.

Finally, I would say that loneliness is a flaw of dignity. Loneliness and abandonment causes a person to lose his self-esteem because it is difficult to believe that life is worth living when one is lying alone in bed, in a serious condition. Thus, I believe we all have a responsibility concerning sick people; a responsibility that obliges us to look at them in a way that gives them back their dignity. As for us, we have been counting on our friends and family and didn’t hesitate in asking the carers, who have been trained professionally, for help, in order for Gaspard to receive this same hope. Each and every one of us comes up with hidden resources. Thus, we need to make sure we develop our ideas and surround our sick ones because they need a lot of strength and courage to carry on having any self-esteem. These people live in a situation of dependence, life has become fragile, and their self-confidence has been affected.  You simply need to show them, through the way you look at them, that they have dignity, so that they reach their own happiness.

30 years old, married and mother of 4 children. Gaspard is the youngest. She is a volunteer in an association that accompanies sick people. She works as a management assistant.

Also read: Gaspard’s mum is wondering: What will happen when Gaspard’s health gets worse than Vincent Lambert’s?