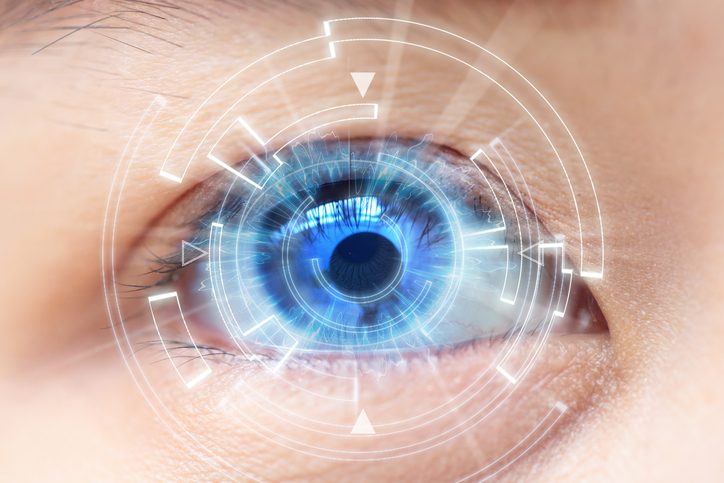 The French company Pixium Vision has just published the first results obtained with its new retinal implant. This implant known as Prima was implanted under the retina of the first five patients between December 2017 and June 2018. The interim results of the trial were presented at the American Academy of Ophthalmology’s (AAO) annual meeting in Chicago at the end of October.

This innovative retinal implant follows in the footsteps of Iris II[1] (also developed by Pixium Vision), Argus II[2] (American) and Alpha IMS (German), all of which use networks of wires implanted in the eye. However, between recurrent faults, sealing problems with the wires and the often “coarse” visual resolution, these devices were deemed inadequate. Prima uses wireless technology which follows “a radically different philosophy”.

In a healthy eye, the retina is lined with photoreceptor cells that take up the light signal and convert it into an electrochemical signal. This signal is then “transformed into a nerve impulse and carried by the optic nerve as far as the visual cortex (at the rear of the brain) where it is transformed into images”. In patients with age-related macular degeneration (AMD), a degenerative disease affecting the retina, photoreceptors in the central zone of the retina, or macula, gradually cease to function, thus preventing central vision needed for reading or facial recognition. This is the leading cause of severely impaired vision and blindness in North America and Europe in individuals over the age of 65.

The Prima implant is a small rhombus with sides 2 mm long and 30 µm thick, i.e. three times thinner than a hair, fitted with 378 electrodes that function like a mini solar panel. “The system comprises three components: a wireless, sub-retinal implant; a pair of glasses fitted with a mini camera and a mini projector; and a pocket computer. The miniaturised camera (mounted on the glasses) registers a scene, which is then analysed by an algorithm in the pocket computer. The latter reconstitutes simplified, useful images (movements, letters, etc.), which are then sent to a mini projector (incorporated in the glasses). The latter transmits them to the Prima chip implanted under the retina, via infra-red impulse”. Infra-red technology is used to avoid overwhelming the photoreceptors that are still functioning by emitting a significant light signal, thus facilitating chip activation. The function of the downstream neurones is unchanged.

The trial results were presented in Chicago by Yannick Le Mer, a surgeon at the Rothschild Foundation, and by José-Alain Sahel, ophthalmologist and director of the Vision Institute in Paris and Head of Department at the Rothschild Foundation and l’Hôpital des Quinze-Vingts, where patients underwent rehabilitation. According to initial findings, “the residual peripheral vision of the five patients was not reduced” and “the implant restored visual perception in all of the implanted patients”. Furthermore, the visual resolution achieved is “the highest ever observed with a retinal implant”.

[1] Authorised marketing of a bionic eye in the European Union