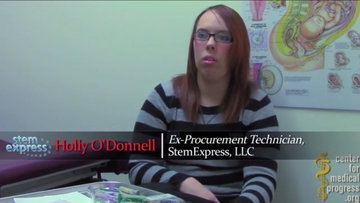 On 19 August, the Center for Medical Progress Association put a seventh video online, shedding further light on the illegal and extremely shocking practices of the American Family Planning Association concerning the trafficking of organs taken from aborted foetuses.

In this video, Holly O’Donnell, a former technician at biotechnology company, StemExpress, reports how one of her colleagues removed the intact brain of an aborted foetus whilst its heart was still beating, in a family planning clinic in San Jose, California.

The colleague in charge of the procedure wanted “to show” Holly O’Donnell “something rather cool”.  Holly recorded what she saw,“At that point, she tapped the heart of the fœtus with an instrument and it started to beat.  I sat down and looked at the fœtus. The heart was beating and I didn’t know what to think”. She said that she did not know whether the baby was alive or dead.

The colleague then prepared the foetus for dissection and cut open the head in order to extract the brain. “I cannot describe what I was feeling then,”explained Holly O’Donnell who, as technician, was obliged to participate in organ excision.

The young woman left StemExpress after this particularly traumatic event and confirmed that “This was the most developed fœtus I had ever seen.  It had a face. Its nose was pronounced.  It had eyelids and its mouth was also accentuated”.

It should be remembered that this kind of practice is extremely illegal.  Californian law bans any experiments on foetuses if the heart is still beating.

The furore continues in the light of these revelations.  Many shocked sponsors and family planning partners have already kept their distance whilst some States have stopped subsidising the organisation.