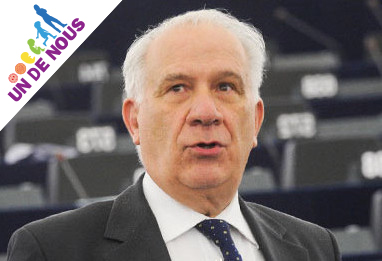 “One of Us”: legal, health and political experts committed to defending human embryos

After having been sent away by the European commission in 2014, the greatest European Citizen Initiative (ECI), One of US, is currently inviting legal, health and political experts from all over Europe to sign a petition calling upon a key debate aiming at restricting the European funding to ethical programmes alone. These do not include embryo destruction.

Gènéthique: Why have you launched an “appeal to experts”? What is the aim of this mobilisation?

Carlo Casini: On May 27th 2014, the European Commission decided against promoting a parliamentary debate concerning the One of Us European citizen initiative that had brought together 2 000 000 citizens. The objective of this initiative was to ask the European Union not to provide any funds to embryo destruction. This was the first move of the new tool of direct democracy [2]. It was the first according to the calendar but also according to the number of people who joined the movement. This denial hurt the concept of democracy. A wound I believe was caused by very great embarrassment. Throughout the whole of Europe, public institutions try to never answer this fundamental question: Is the human embryo an object, a person, or a subject? More simply: Is the newly conceived human being “one of us”?

This is a decisive question, and we hope that if 2 million citizens were not enough to give “the voiceless a voice”, maybe there is another way.  We hope the authorities will not ignore the numerous testimonies of people whose expertise gives them authority thanks to their knowledge and experience, and who declare that any given human embryo is truly one of us, and that it is right to say so and write it down in our laws. The experts can make “the voice of the voiceless” resound in the heart of Europe, and arise a serious and in-depth debate.

The second phase of the initiative aims both at ending the European funding towards activities that destroy human beings, and truly defending unborn children.

The courage of mothers and families who welcome a new life when an unwanted or difficult pregnancy occurs can indeed only be motivated by the recognition of the unborn child, considered to be a child, to be one of us.

What is more, these numerous public testimonies of people standing in a position of authority, explaining that all unborn child is one of us, will make it possible for physicians to call upon their right to conscientious objection, and no longer consider it an unreasonable scruple.

But there is yet another objective, more important still, and that is the reestablishment of the truth concerning human rights. Nowadays, they are constantly spoken of, but are inconsistent and contradictory when mankind endures discrimination in the form of an unborn child, reduced to the state of “object”. We also wish to help Europe recover its soul, rooted in the very centre of human dignity.

G: Who is concerned by this appeal?

CC: We wish to collect the testimonies of all scientists and physicians who claim that “it is true: a human embryo is ‘one of us’”. We ask law experts to confirm that the modern concept of law requires the respect of the principle of equality, and therefore that embryos must also be recognised as one of us. Finally, we ask our political leaders to recognise that the objective of politics is the common good, and that the common good is the good of all.  Each individual human being must be considered as “one of us”.

G: How do you count on mobilising experts around these questions?

CC: We intend to launch the appeal next March 12th in Paris. We hope to create a network of experts that will bring together medical organisations, lawyers and law experts, who work in hospitals, in judges and lawyers organisations, in universities, in parliaments, and in city and regional councils.

G: What is the relation between this appeal and the One of Us federation?

CC: The relation is very strong! The federation came as the conclusion of the first citizen initiative that was rejected on May 27th 2014. On September 4th of that same year, the federation took its name. It was created to make the voice of the voiceless heard throughout Europe.

G: What are your expectations concerning this initiative?

CC: As I said, we hope to cause people, mainly at the European Parliament, to seriously reflect on human dignity and the true soul of Europe and, consequently, at least obtain the European Union’s neutrality concerning the great questions of life. Europe must never contribute to the destruction of human beings. And I am sure that the initiative will also help to save many lives because it enlightens the heart and mind of society as a whole. It is particularly true concerning mothers, fathers, and families. It is one’s conscience that enables one to defend unborn children most effectively. Experts, thanks to their testimonies, can enlighten people’s conscience and therefore protect unborn children; not against their mothers but alongside their mothers.

G: What is your role?

CC: I promoted the first phase of the One of Us initiative. Later on, I suggested that the Federation should promote the second phase. This proposition was agreed to unanimously. We cannot stop at the violation of democracy. We wish to resist this violation of democracy.  We wish to resist this plot against life that does not even care to cast an eye on the poorest of the poorest, as mother Teresa used to call unborn children. We are working together. I enthusiastically agreed to take on the task of coordinating the initiative, because I believe that the recognition of equality for all human beings is the cornerstone of the renewal of our civil society and of modernity. It is a global and worldwide issue that, to be properly resolved, needs the opinion of experts; a widespread and strong testimony.

You are a law, political or health expert? It is now your turn to sign, and pass on the “appeal to European experts”.