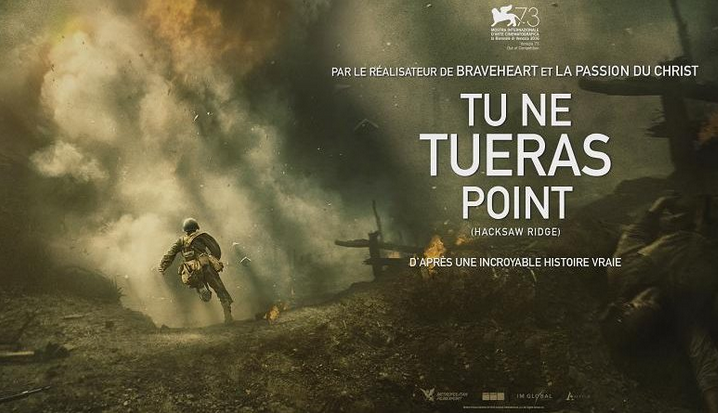 [Movie] You shall not kill: conscientious objection between the lines

Released in cinemas last November 9th, the movie “You shall not kill”  prevailed during the end of 2016. The movie relates the story of a conscientious objector who chose to serve his country by engaging in the second World Ward, without carrying a weapon.

Though the story told, all the more impressive as it relates a true story, happens in a military context, the rules he followed can be transferred to the medical field: what is at stake is the refusal of violating a human life.

The movie clearly shows that objection is not a desertion, a way of escaping the war, of protecting oneself, or a refusal to obey the law for no reason, but truly an act of courage which challenges all those around the objector. Desmond Doss, the hero, feels he must play a part in the war that is affecting his country. As many other young people around him, he, also, wishes to engage, but by caring for the wounded and without ever carrying a weapon. He refuses to carry a weapon because he refuses to kill.

However, his choice is not a reckless one. His decision is neither a sudden impulse, nor is it a romantic desire. It is the fruit a of a life incessantly confronted to violence, in which the hero himself experienced that it can also be self-destructive. And faced with the disbelief and incomprehension of his military hierarchy, he takes responsibility for his decision.

Desmond is no troublemaker. Though he refuses to do what he is asked, he does not try and make the situation worse. A situation, in which, by being sent to prison, he risks missing his objective: to treat the wounded on the battlefield. On the contrary. After having spent the night being beaten up (his captain having done everything he could to discourage him and push him into going home), he refuses to denounce his comrades. He simply says: “I sleep like a rock”. He wants a solution that respects his conscience and it is finally his father, a soldier broken by the first war, who, during a military trial, will enable him to join his unit and take his non-violent engagement to its end, at the very heart of the carnage.

As objector, one often experiences solitude which, whatever the turn of events may be, ultimately places one in front of one’s conscience. This solitude, Desmond knows it well, particularly when Dorothy, whom he was to marry the day he was arrested, pays him a visit in prison to ask him to give up the war. Experiencing solitude does not however have anything to do with self-immuring or self-pitying. In fact, Desmond’s desire is turned toward others: treat, relieve, save as many as possible.

Cause of his own actions, Desmond is in full possession of his human freedom. He is free. This will lead him to a supreme act of courage: while every single soldier has retreated, while everyone knows that the hundred wounded still on the cornice will be ended by the enemy in the morning, Desmond, alone, remains on the devastated battle field. He saves without distinction… and without any hard feelings for the past humiliations, the lives of 75 men, of whom two are Japanese. Until the end, he remains faithful to the Truth of a good action that supported his every move… and turned him into a hero.