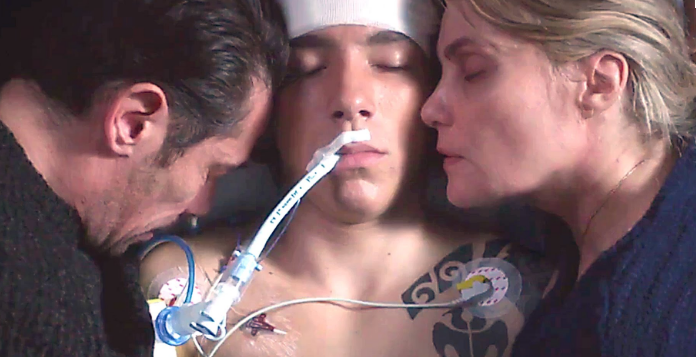 [Movie] “Heal the living”: is the destiny of some people to heal others?

Supported by formidable media backup, it seems impossible to miss the movie Heal the living. The story, an adaptation of the many-times awarded book from Maylis de Kerangal, had already been adapted for the theatre.

Simon, 17 years old, arrives in the emergency service after a car accident. His state is rapidly degrading and doctors declare him to be in a state of cerebral death. Confronted with their son’s brutal death, the parents then meet the carers who bring up the idea of an organ donation; Simon’s liver, kidney, and heart are in perfect shape, and can be a precious gift to sick people awaiting a donation.

In parallel, the movie introduces Claire, whose heart is continuously stimulated by a defibrillator. Her doctor warns her that unless she gets a new heart, her life now hangs on a thread.

Chronicle-like, the movie describes the procedure from donor to receiver, which ends on Claire’s open eyes. She wakes up right after the surgery that gave her a brand new heart. Pathos is present every step of the way: the parents’ tears, the children’s tears and concern about the transplant, and the concern of Claire’s female companion. The fact that she is a homosexual is an addition of the movie. However, the two final tears are Claire’s; tears of joy and happiness to be alive.

Ethical questions are completely left out of a story which the writers try to make as factual and positive as possible. The doctor explains how Simon is in a state of cerebral death, and is kept alive thanks “to machines”: “If we stop the machines, everything stops”. Artificially kept alive, is Simon dead? In the last part of the movie, the surgeons come in and take out his beating heart that stops once the arteries are cut. “Stitched up” in Claire’s chest, it then starts beating again. Is that heart only a muscle? It is indeed the other question, barely raised, suggested by Claire who asks herself about the donor’s identity, his sex. “Is it a man or a women?”  Organ donors being anonymous in France, the surgeon smiles without answering. Claire had already asked herself what it would mean to “live with someone else’s heart”. It is not just a meaningless question. The recent campaign of the Biomedicine agency on organ donations brought up the fact that when speaking of organ donations, the people who remain the most difficult to convince are…the receivers. Is there an answer to that question?

Organ donation demonstrates a wonderful opportunity of human solidarity. However, even in the presented conditions, perfect, transparent, in which doctors and carers are filled with compassion, where does one draw the line between life and death. In the movie, very smooth, the routine is well oiled and everything “goes well”. Despite the efforts deployed, the movie does not reflect the complex reality in which life and death play side by side? Have we finally got to a time in which some men’s purpose is to “heal” others? If so, in what conditions?