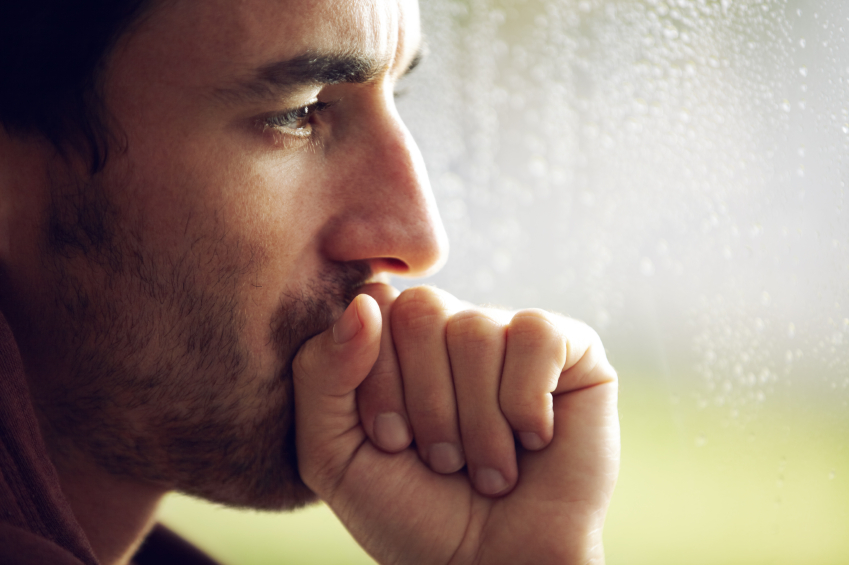 Men, not spared by abortion

Since 1975, abortion has become women’s business. They are the ones who, on their own and freely, decide what to do about their pregnancy, whether it is expected or not. Indeed, the law does not mention the genitor, the person who, along with the women, is at the origin of the life slowly growing inside the womb. Some men, however, do feel the consequences of abortion as painfully as women. Généthique has chosen to draw attention on this aspect of the question, which has been put aside for the past years.

Michel Hermenjat [1] remembers the abortion. It was just 40 years ago. He remembers every minute of it. And he admits: “It took me 20 years to recognize that maybe I too was concerned by what happened. My so-called neutrality made me the accomplice of the loss of my first child, of whom the absence was long felt”. (cf. Testimony of Michel collected by Généthique: Cet avortement m’a complètement dépossédé » (I was completely dispossessed by that abortion)

Deprived of paternity, they feel helpless

Though the male partner is often seen as the person who pushes the women to abort or as the absent party, one cannot but admit that men are mostly left out of the decision-making. Stéphane Clerget[2], psychiatrist, notes : « Legally, men do not have their word to say. Their only chance is if the woman chooses to dialog, that is if the women choose to inform them of the pregnancy and asks them for their opinion”.

According to Michel Hermenjat, “A women who decides on her own whether to carry on with her pregnancy or not has considerable power. The distress of a woman implies that the man is unkind, rejecting, tyrannical, abusive or neglecting, and that he may claim rights over the child she is carrying. It is clearly caricature!” He then adds: “the right of women to abort implies a mismatch between man and motherhood, which justifies taking away from man any right over pregnancy”. It comes as a mark of unworthiness that encourages men to flee their responsibilities, thus leading to a vicious circle.

In other situations, men “feel threatened” explains Stéphane Clerget. “They feel deprived, left out of the procedure, and if on top of everything, the woman chooses to keep the baby, they might end up having to provide financial support for the next 20 years! They feel trapped. In such circumstances, a man will pressurize the woman into aborting. Men no longer commit themselves because it is no longer their decision to make”.

Faced with this terrible statement, Sabine Poujade, who accompanies women after they have aborted, notes that, for a couple of year now, men also have started to cone to see her to talk about their distress. They usually come to her after having played neutral, like Michel Hermenjat, or because they tried in vain to prevent the abortion: “Men who tried to prevent an abortion could do nothing. They had no recourse. They were found helpless, after having been so strong at implanting life. In that specific case, they were found completely helpless and feel totally powerless” (cf. Testimony of Mickaël collected by Généthique: “Elle veut avorter. Il ne peut rien faire pour l’en empêcher” (She wants to abort; there is nothing he can do to prevent it).

Taboo for women, the question of a post-abortion syndrome is even more so when it comes to men. In the anamnesis work that Stéphane Clerget carries out with his patients, he recognises that “one does not think of asking a man if he has ever “experienced” an abortion. When the question is asked, it is asked to women not men. It is not considered to be any of their business, and is not seen as potentially traumatic”. Through his work, Stéphane has noticed that men are much less affected by the syndrome than women, “mainly because women experience pregnancy in their own flesh”.

However, Sabine Poujade has noticed that men also show signs of suffering concerning the absence of a child. “For them, the same as for women, time seems to have changed from the moment of the abortion.” Though during the month that follows an abortion, men and women feel equally relieved and experience a sense of freedom, the “afterwards” is often much more difficult to cope with. Regrets, remorse,… men start to feel like they have been put aside, as if they have been dispossessed of what they have implanted into the mother’s womb, of having been excluded when, actually, they are co-authors.  Men may come to feel very angry, a feeling they access much faster than women. Sometimes, the anger is mixed with aggressiveness that can, sometimes, be expressed against the wife or the born children. It will take a man longer to process than a woman. The tears will be more discrete and last longer, but the same as a woman a man needs to be comforted. According to Sabine Poujade, “men and women alike need to go through a process of mourning”. In this process, Michel Hermenjat believes that “it is for the man to engage in the process of mourning, starting by recognising the part he has played, often a major one, in this tragedy.”

Man, defective when faced with paternity

Men are often criticized for not being protective enough, but they have been put aside specifically at a time when it was their job to protect and answer the need for safety of a women who experiences frequent changes of mind at the beginning of her pregnancy. Sabine Poujade speaks of a man she remembers: “I recall that man… He and his wife had two children, the third one turned up too soon. Together they decided to abort. He dropped her off at the clinic; she said it was all right. When she came out, she got in the car and he felt like a glass wall had been put up between them: “I was there and I did not protect her.” He immediately started feeling anxious and started having nightmares. He could no longer enter into contact with her: ‘I did not know how to approach her, because I had been defective.’ ”

All these couples were disturbed in their comfort, in despair faced with the news of this baby to come, who confronted them with the unknown. If, what’s more, they need time to think things through, men will never commit themselves on such a short notice. Stéphane Clerget explains that “the 12 weeks’ delay will make it even more difficult for a man to support his wife. It is only after that time is over that he will start picturing himself as a father. Thus, more often than not, it is only afterwards that men start feeling guilty, a guilt that will be all the worse as they too wanted the abortion, or were accomplice. “Guilt”, explains Sabine Poujade, “is a diffused feeling men feel in their shame of not being a good father, in their fear of not being a good companion. They feel like they have missed something. They are angry with themselves for not having realized how serious abortion is.” She remembers that man, who, when his girlfriend became pregnant, told her that solutions did exist for that kind of thing. The woman held tight and kept her baby. Years later, married, they had forgotten all about that episode because “it is tough, difficult not to welcome the life of the person you have created. It signs the child’s death sentence.” He was in such awe in front of the child he loved, he felt ashamed of having even imagined abortion as a solution: “How did it even cross my mind.”

Anger, shame, and guilt are feelings men experience the same as women. “The only difference is that men feel like they have been defective in protecting their child, as a father should.” Stéphane Clerget adds: “it is men’s potential paternity that is affected”. When the decision to abort has been taken, it can come with the acknowledgment that there is no desire to found a family or to have children together. What is actually “thrown out” is the possibility of a love story, and this comes with the sadness of the end of a relationship. Abortion is inscribed in the mourning of a story, of a family life. It is more than just the mourning of paternity.”

As underlined by Michel Hermenjat, it is urgent that men and women relearn to talk to each other: “We are the victims of a huge misunderstanding that is harmful for future generations ». This dialog must also involve changes, because according to Sabine Poujade: “Otherwise men are likely to be faced with hard and dominating women, who will not bring out their masculinity or the greatness of their role as a father”.

However, as noted by Stéphane Clerget, a new kind of behaviour is arising, that enables one to believe that it is possible to take up the challenge:  “Men are starting to see things differently”. Nowadays, young fathers are much more involved in caring for their children, though, according to Stéphane, the change is even more perceptible in underage men, faced with an economical context that puts them to the side on a professionally level: “If they can’t be active economically, they can be active as parents.” Sometimes, going against the way their elders have always seen things, they do not hesitate to walk away from abortion and invest in family by becoming parents. Sometimes, at a very young age.

[1] Michel Hermenjat is a socio-pedagogue and author of the book: “Cet enfant qui m’a manqué. Parole d’homme face à l’avortement” (That child I missed. Words of a man faced with abortion), published by “editions Première Partie”.

[2] Stéphane Clerget, « Quel âge aurait-il aujourd’hui ? Le tabou des grossesses interrompues » (How old would he be today? The taboo of interrupted pregnancies), published by “éditions Fayard”, that gives the floor to women.