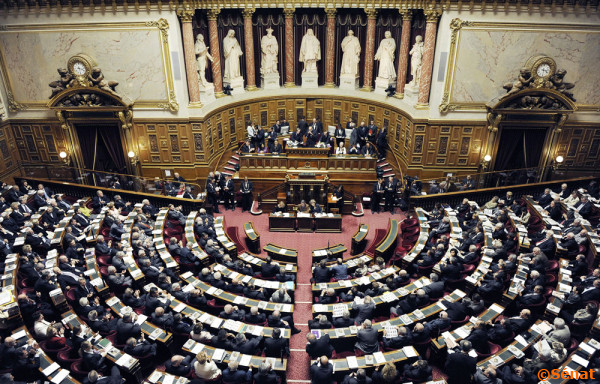 Law of Bioethics: the French Senate torpedoes the text of the French National Assembly

The bill on bioethics has been examined by the French Senate Committee on Social Affairs on 29th and 30th March 2011 before to be discussed in session on 5th to 8th April 2011. This second parliamentary reading – after the first one in the National Assembly – was the occasion for a real unwinding of the text established by MPs. Under the pressure of the scientist lobbies, the senators, among other modifications, have chosen to go from a prohibition scheme of the research on human embryo to a regulated authorisation scheme. They also went back on the provisions adopted by the National Assembly which would allow limiting eugenics risks related to prenatal diagnosis (PND). Yet some of them have defended amendment after amendment to weaken the more transgressive measures: let’s cite in particular Marie-Thérèse Hermange, Anne-Marie Payet, Bernadette Dupont, Bruno Retailleau, etc. Back on the main provisions and the challenges of a controversial text which will be subject to a second reading in the National Assembly by the end of May.

During the committee stage, the senators have removed a provision from the bill, according which PND could be proposed to pregnant women only “when medical conditions require it“. Supported by the MP Jean Leonetti to avoid any systematisation of the screening, this measure aroused a lively debate among health professionals (see. Monthly letter 135 – March 2011), some of them denouncing “a serious impediment to patient rights“. The committee came over to their way of thinking, estimating that adding these few words could lead “to the non-respect of the right of the patient to be informed“, to a reinforcement of the physician power to the detriment of free choice of women and to a “rupture of equality between women“. Moreover, Alain Milon, the rapporteur of the Committee on Social Affairs for the bill on bioethics added that this would “give a greater responsibility on professionals, who will be accused not to have proposed a screening to a woman ‘evaluated without risk’ whereas this one was proved“.

This position did not win unanimous support: several senators have tabled amendments to restore the physician in her/his prescription liberty as it is defined by the Code of medical deontology and to avoid an excessive screening. This way the senator Paul Blanc has defended an amendment stipulating that the “prenatal diagnosis is not intended to guarantee the birth of a free-disease child“: thus the physician would not be obliged to propose a PND with the only purpose to protect herself/himself from possible legal proceedings as it is often the case. Three other senators have presented amendments aimed at restoring the text of the National Assembly: the senator Bruno Retailleau who notes that “the risk to drift in search of a ‘zero defect child (…) works on our society“; Anne-Marie Payet for whom “France went (…) into a bad way. It holds the world record for prenatal screening of disability, but also the one of medical termination of pregnancy” and Bernadette Dupont who warned: “an abuse of examination must not make incur the risk of yet latent eugenics at more or less short term“. None of these amendments was adopted. Yet, as Bruno Retailleau explains it, “such a systematic approach places on the shoulders [of the pregnant woman] a much greater constraint that the one which can result from a free choice in the intimate relationship of trust built over the years between the patient and the physician“.

Finally, the provision according which, “within one year from the publication of this law, the Government delivers its report to the Parliament concerning the financing, particularly public, and the promotion of medical research for the treatment of Down syndrome” has been modified. Now the text mentions a “detailed balance of public funds allocated to the research on Down syndrome and cytogenetic anomalies“. Bruno Retailleau presented an amendment restoring the mention explicit to Down syndrome: “As we dedicate for screening this disease more than around €10 million, it would also be logical to dedicate funds to the research for improving the everyday lives of Down syndrome people“, he explained. The amendment has not been adopted.

The Senate extended the medically assisted procreation “to all couples“, opening it de facto to homosexual women.

Surrogacy was subject to lively debates: three amendments have been placed to legalize this practice, one by the rapporteur Alain Milon. They were refused 201 votes against 80. The government asserts that this practice was contrary to the unavailability of the human body and to the dignity of the person.

Moreover the senators have come back on two provisions which have been adopted by the National Assembly. The post-mortem embryo transfer and the oocyte donation by nulliparous women.

The anonymity of gamete donation, which had been lift by the Committee on Social Affairs, was finally maintained.

Major breaking point with the text of the National Assembly, but also with the choice of France as it is defined in the article 16 of the civil code to respect life and dignity of the human embryo just when its begins to develop, the status of the research on the embryo experienced a real revolution. After particularly lively discussions, it has changed from a prohibition scheme with derogations to a regulated authorisation scheme.

For the senator Bruno Retailleau, the adoption of such a position, opposed to those of MPs and government, has a double explanation: from one hand, “the Senate which prides itself to protect the individual liberties even if this means to neglect the public good“, and from another hand “the influence of the scientific lobby on the senators is more and more significant“.

This way, the day before the examination of the bill in the Committee on Social Affairs, Pr Marc Peschanski announced the publication of works performed on embryonic stem cells he qualified as “spectacular demonstration“. His study, published in Cell Stem Cell, presents the results of his researches on Steinert’s disease, a muscular dystrophy: embryonic stem cells sampled from embryos coming from a pre-implantation diagnosis allowed him to model the pathology in question and to perform a molecule screening to identify the pharmacological compounds having “potentially” a “therapeutic effect “. “With these works, Pr Marc Peschanski wants to demonstrate the necessity to work on the embryo and thus to change the law“, commented the Figaro whereas the rapporteur Alain Milon was sensitive to the “arguments” of the scientist.

Other researchers did not hesitate to criticize a breach to “the publication deontology of research works” and an offence to the dignity of the human embryo. For Pr Alain Privat, former unit director of Inserm and former study director at the Ecole pratique des Hautes etudes – Practical School of High Studies (EPHE) and Monique Adolphe, former chairman of the EPHE and former chairman of the Pharmacy Academy: “this lobbying is incomprehensible on a medical and scientific level, except if you see the necessity for some organisations to justify to their generous contributors the very high investments made in this field of the research on human embryonic stem cells, research which only, in fact, leads to no efficient therapy to date nowhere in the world. The drug and the procreation industries are undoubtedly not foreign to this real ‘track’ to human embryonic stem cells.“

The authorisation of the research on the human embryo has been yet voted at the Senate on 8th April 2011. For the rapporteur Alain Milon, who supported the proposal, a “regulated authorisation” “also respects the specificity of the embryo as well as the prohibition of the principle of derogation. Above all it has the clarity:  clarity for the scientists, clarity for the international image of France. ”

The government, by the vote of the minister for Health Xavier Bertrand, opposed to a position he finds contrary to the equilibrium which represented the prohibition-derogation scheme. Thus he presented an amendment, the amendment 169, to restore the initial text of the government. Amendment rejected 187 votes against 142, like the amendment 148, supported by the government and presented by Anne-Marie Payet which aimed at restoring the text by the National Assembly, a little bit more restrictive than the government’s one.

Let’s note that on the contrary, the amendment 32 aimed at removing the article 24d which foresees a conscience clause to any researcher, engineer, technician, research assistant, physician or medical assistant who would have to face in any way researches on human embryos or human embryonic stem cells, has not been adopted. The conscience clause is thus maintained.

Faced with the end of the discussion and the votes of the senators, the reactions are lively in political as well as scientific and associative fields. For Alexandra Henrion and Alain Privat, researchers at the Inserm, lifting the prohibition on the research on the embryo “raises questions for scientists working in the field of live sciences“. They underline that “the scientific research, universal quest for knowledge and truth […] must not be blind on ethical level.“

In a press release, Jérôme Lejeune Foundation wonders about the method adopted by the Minister for Health Xavier Bertrand: whereas he said to be himself in favour of the research on the embryo for diagnosis purpose, what refused the National Assembly, does he defend the authorisation scheme by conviction or to ensure “a proportion of his electorate with which he knows he will have deal with?“

Faced with the devastating provisions voted by the Senate, the second reading in the National Assembly is very much awaited. The MP Hervé Mariton noted: “It is clear that on these society questions the Senate is more permissive than the Assembly. We assume this different view and it will be up to us to come back to this vote in second reading to reaffirm our convictions. “For its part the government affirmed that it would carry on defending its positions, despite the vote of the Senate, on two precise points: to cancel the opening of the MAP to homosexuals and to come back to the prohibition scheme on the research of the embryo. “We will have the occasion to come back to it, whether in the National Assembly or here, within the framework of the second reading of this bill“, affirmed the French Secretary of State for Health Nora Berra.

Let’s note that moreover senators have restored the revision clause of the law of bioethics every five years.