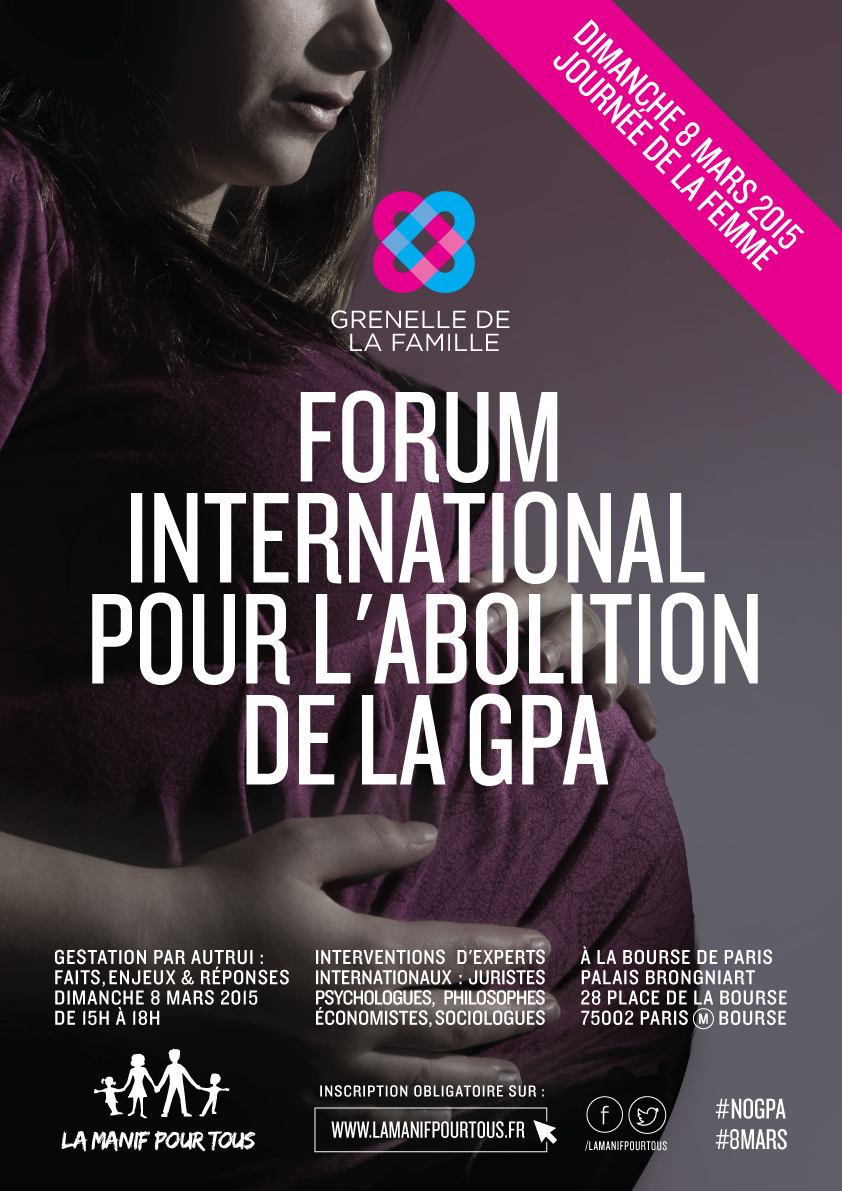 On 8 March, 2015, for International Women’s Day, the first “International Forum for the Abolition of Surrogacy” was held at Palais Brongniart in Paris. In one afternoon, some fifteen speakers, legal experts, philosophers, psychologists, filmmakers, etc., spoke before a packed amphitheatre to denounce the reality of “gestation for others” and to call to make all efforts to ban it in France and around the world.

France and the European Union, in favour of surrogacy

Adeline Le Gouvello, attorney at the “Juriste pour l’Enfance” association, opened the discussion. After pointing out that surrogacy is illegal in France, she warned about the real situation – despite the ban, surrogacy practices exist in France, and with the government’s consent. She was categorical: “in France, surrogacy has all the attributes of legality” for several reasons. First of all, because all children born through surrogacy abroad and ordered by French citizens automatically obtain French nationality once they have spent 5 years on French soil. Secondly, because France does not condemn infringements to this law by French couples who order children through surrogacy abroad, and the French government itself refuses to strengthen the criminal penalties for surrogacy (a bill by Mr Leonetti was rejected). Lastly, because the European Court of Human Rights recognises the filiation of children born to French couples through surrogacy abroad.

On this last point, Grégor Puppinck, director of ECLJ, analysed the decisions handed down by the European Court of Human Rights. In decision after decision, it has accepted surrogacy in Europe. While European precedent is highly in favour of surrogacy, he insists on the fact that the judges at the Court are divided on the subject and it is still possible to reverse the current trend.

The film by Jennifer Lahl, a paediatric nurse and director of the film “Breeders: a subclass of woman“, refers directly to the reality of surrogacy through the stories of surrogate mothers and children born of surrogate mothers. She explained that the general public is unaware of the realities of surrogacy and that this film’s purpose is to increase awareness. “After seeing this film, many people change their minds about the sale of oocytes and surrogacy,” she explained.

Jennifer Lahl emphasised the fact that surrogacy entails many risks and much suffering for women, with a very high rate of twin pregnancies, high blood pressure and eclampsia, etc. They have longer and more costly hospital stays. And the early separation of the surrogate mother and the baby is a particularly difficult experience.

Anne Schaub, psychologist, pursued the question of the “trauma of conception” that children born through fertility treatments or surrogacy can experience. She pointed out that “the gestation period is crucial for a small child’s cognitive and psychological development”. “The emotional bond with the mother who carries the child is very important,” and the small child has a “memory card (amygdala of the brain) that records everything several weeks before birth,” she added. And thus, the mother who carries the child becomes “the foundation of the child’s security” and separating them can lead to “depression in new-borns“, a “feeling of no longer existing“. She stated the obvious – “A baby cannot help but form an attachment […] separating him, taking him away at birth creates a major traumatic break.“

Jean-Marc Oswald, of the “Aux Captifs la Libération” association, dared make the comparison. He spoke of a “fragmentation that is contradictory to the unity of the human person”. People who engage in prostitution have to separate their minds from their bodies to have sexual relations with a person not of their choice. It is like surrogacy, in which the freedom to control one’s body “is replaced by a perverse exploitation of the body” requiring the woman not to become attached to the child she is carrying. For him, the cause is clear – the lure of money and debt. This is usually “the main reason why people accept” prostitution. It is also a point in common with surrogacy.

After surrogacy, the artificial uterus

Marianne Durano, philosopher and co-author of the book No limits, envisages a step beyond surrogacy. After studying the feminist foundations of surrogacy “my body belongs to me […] my body is a tool”, she denounced the domino effect of reproduction techniques: “artificial reproduction techniques are used to solve problems we never would have had without them.” And the more new techniques there are, the more new problems we have. Thus, after surrogacy, whose pitfalls we know, now comes the artificial uterus. For her, surrogacy is the Trojan horse of transhumanism. The objective will have been achieved – “when humans are no longer born of women, we will be able to engender the humanity we want.”

In conclusion, Ludovine de la Rochère, President of “Manif pour Tous”, explained several forms of action for working toward a ban on this practice in France and around the world:

– She called upon citizens to sign the No Maternity Traffic petition to be presented to the Council of Europe in June 2015.

– She spoke of the creation of a surrogacy and transhumanism observatory.

– She announced the presentation of a bill by French MP Valérie Boyer aimed at declaring surrogacy a special offence punished by stronger penalties. This bill “also includes the obligation to prepare an international convention on the prohibition of surrogacy.”