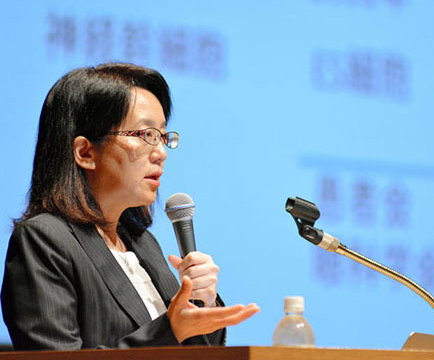 “In the future, all diseases could potentially be treated with iPs cells”

Masayo Takahashi, Professor at the Riken Public Institute and  “an international pioneer in clinical trials based on iPS stem cells[1]“, has announced that, “in future, all diseases could potentially be treated (…) with iPS cells, even if only minimal effects are initially observed”. Even if they do not provide a cure, these pluripotent stem cells, created from mainly adult skin cells, could  “improve a patient’s quality of life”. She explained that, “initially”, she “didn’t see how iPS cells could help to combat [degenerative diseases for which no treatment exists, such as lateral amyotrophic sclerosis] this condition, which affects the whole body (…) “. Since doctors “told her that even if patients only manage to move a finger, this nevertheless constitutes progress, allowing them to communicate, she agrees that they could be useful even for this type of condition”.

The scientist is carrying out a clinical trial based on the use of iPS cells in the treatment of age-related macular degeneration, which she considers to be  “a major success”. The first patient was treated in 2014 and her sight stabilised without any medication (seeJapan: iPS cells save the sight of a female patient).

The Japanese Government is encouraging this research and teams are therefore “at the cutting edge of this technology”: “100 clinical trial projects involving iPS cells are currently underway”.  “iPS cell banks” are being developed. These could reduce the costs of such treatments (see Japan: millions of dollars invested in iPS research).

The AFP[2] also announced that,  “next week, the Japanese Government should authorise the production of human embryo stem cells for therapeutic purposes“. However, the use of these cells  “poses a basic ethics problem”, unlike iPS cells.

[1] induced pluripotent stem cells. These are adult cells that are reprogrammed at the pluripotent stage, restoring their ability to produce any type of cell.