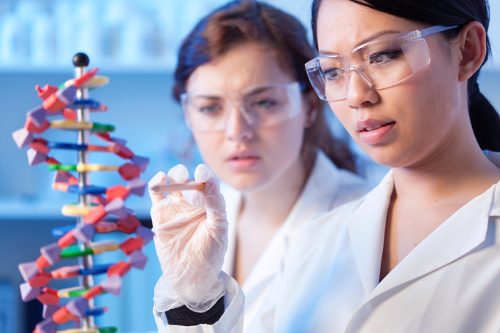 The ever-increasing knowledge we have of the living combined with technical advances enables researchers to make considerable progress in the care and therapies that are proposed to the sick. However, they come with ethically-questionable non-negligible risks.

The Hippocratic oath: “Faithfull to the laws of honor and probity, my sole concern will be to reestablish, preserve or promote health… I will not undertake any action that exceeds my competence…” is more relevant now than ever before at a time when Bellerophon’s temptation, that of becoming God, is within reach. Alain Privat, neurobiologist, corresponding member of the Academy of medicine, and expert for Gènéthique puts forward two examples of possible abuses.

In the field of neurobiology, the knowledge accumulated over these past decades has already written the great lines of what could turn out to be the best or the worst between the hands of biologists and doctors: a cured man, or an augmented one.

Two examples can be used to illustrate this duality concerning two regions of the central nervous system, opposed to each other both anatomically and functionally.

The prefrontal cortex is a region located in the forebrain, in the front of the motor cortex.  Contrary to the primary, sensitive, and motor cortex which only treats one modality, the prefrontal cortex is part of the multimodal association cortexes that integrate much information and play a part in the highest levels of cognition. One of the characteristics of this cortex is that it receives an important amount of afference from a very specific region of the base of the brain, the black substance, of which dopamine is the neurotransmitter. Knowing that the substrate of Parkinson’s disease is the degeneration of the black substance and the decrease of dopamine afferences, that afference is not negligible for doctors.

The modification of dopamine afferences, either by increasing them thanks to a neuron transplant, or by decreasing them through a lesion of the black substance, can easily, if put into non-ethical hands, go beyond the initial therapeutic intention and lead to permanent modifications of one’s mood or behavior. Last century, far more brutal methods were used: between 1940 and 1950, the psychologist and surgeon Freeman carried out over 20,000 frontal lobotomies, in wild or aggressive psychiatric patients, with the results of making the patients completely lethargic. Since then, deep brain stimulations have been carried out in patient with obsessive-compulsive disorders with variable results.

The spinal marrow, prolongation of the brain lodged in the spinal cord, works as an interface between the brain and the rest of the body: on the one hand it receives signals of deep and superficial sensitivity, and on the other transmits the brains’ messages to the muscles and viscera. A lesion of the bone marrow interrupts  this transmission and leads to paralysis and the loss of sensitivity of the region of the body located just beneath the lesion. As it is the case for the prefrontal cortex, a neurotransmitter plays an essential role in motricity control: the serotonin, found in the axons of a certain area of the brainstem, the raphe. We were able, in laboratory rats and mice that were paralyzed after a cord section, to restore locomotive reflexes by transplanting under the lesion, neurons in an embryonic state, of which the neurotransmitter is serotonin. Likewise, we were able, in these paralyzed animals, to reestablish locomotion with serotonin analogue pharmacological substances. Research is ongoing to develop a therapeutic strategy for paraplegics, based on this experimental approach. But again, the temptation to increase the locomotor performances of normal subjects using this method, to turn them into athletic superchampions, is great…

However, we were able to estimate that the relative complexity of the procedures (cellular transplants, microelectrodes…) were in themselves enough to prevent such attempts at manipulating human beings. Very recently, a major discovery in the field of biology disrupted this relative peacefulness. From the observation that certain bacteria are able to defend effectively against some viruses, two researchers, Emmanuelle Charpentier(French), and, Jennifer Doudna(American), isolated a complex called CRISPR-Cas9, which behaves like some sort of “DNA scissors”, capable of replacing an identified gene by another sequence. This discovery gave rise to new hopes in terms of treatment for genetic diseases, at least for the so-called monogenic diseases, in which only one gene is defective. It is the case in neurology for Huntington’s disease for example. A simple manipulation in an embryo before it is implanted can replace the defective gene with a “normal” gene. Manipulations of this type have already been carried out on animals. For example, it was tried on rats affected by genetic blindness called retinitis pigmentosa, and produced encouraging results. One can imagine multiple applications in the field of cancerology or infectious diseases. One can also fear the worst: the simplicity of implementation of these techniques, their quick distribution throughout the world, and the eagerness with which transhumanist movements in the USA and Europe welcomed this discovery are legitimate reasons for concern within the scientific community and all humanity.

The Promethean dream of an immortal man endowed with exceptional intelligence is within reach. The dilemma is the same dilemma nuclear physicians had to face in the 40s, with the atom fission. On the one hand, it meant low cost and indefinitely renewable energy, and on the other, a bomb. We all know how that ended. Today, the situation is even more serious because it is the very essence of our human nature that is at stake, in its singularity and its diversity.