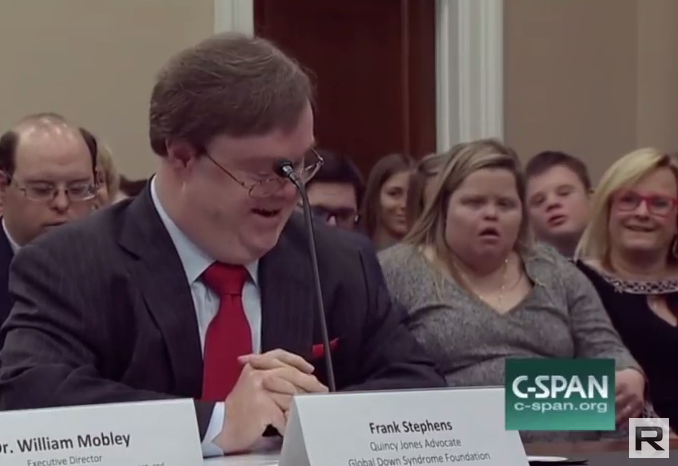 Franck Stephens, with Down syndrome, addresses the American Congress

Last week, Frank Stephens, actor, Special Olympics[1]athlete and promotor, presented his life experiences to the United States Congress : “I am a man with Down Syndrome and my life is worth living “. Rather than “proceeding with prenatal screening and abortion, claiming that this is the best solution to rectify the situation“, he wanted to make Congress aware of the need to allocate Federal funds to research how to treat people with Down syndrome: “To those who question the value of people with Down syndrome, I would like to say 3 things. Firstly, we are a medical gift to society, a blueprint for medical research into cancer, Alzheimer’s disease and immune system disorders. Secondly, we are an inexhaustible source of happiness: a Harvard study has shown that people with Down syndrome and their families are happier than society at large. Finally, we are giving the world a chance to think about the ethics of choosing which humans have the right to live and which do not“.

After pointing out the high rate of abortions for unborn babies with Down syndrome (see Down syndrome eradicated by abortion), he went on to add: “Let’s be Americans, not like the Icelanders or Danes. Let’s pursue answers, not “final solutions”. Let’s be proud of our country: let’s make it our goal to be Alzheimer’s-free, not Down syndrome-free “.

Parents whose unborn child has Down syndrome, and who face abortion or are uncertain of what decision to make, will certainly talk to a medical professional or perhaps a religious advisor, but it is unlikely that they will get to speak to an adult with Down syndrome. If the truth about these happy children and adults was more widely known, the chances of a child with Down syndrome being born and living a long life with Down syndrome would be much higher.

[1] Special Olympics is the 1st organisation dedicated to the development through sport  of individuals living with a mental handicap. The  Special Olympics movement was created in the United States in 1968. Operating in almost 180 countries, Special Olympics brings together over 4 million athletes. It is recognised by the IOC (International Olympic Committee).