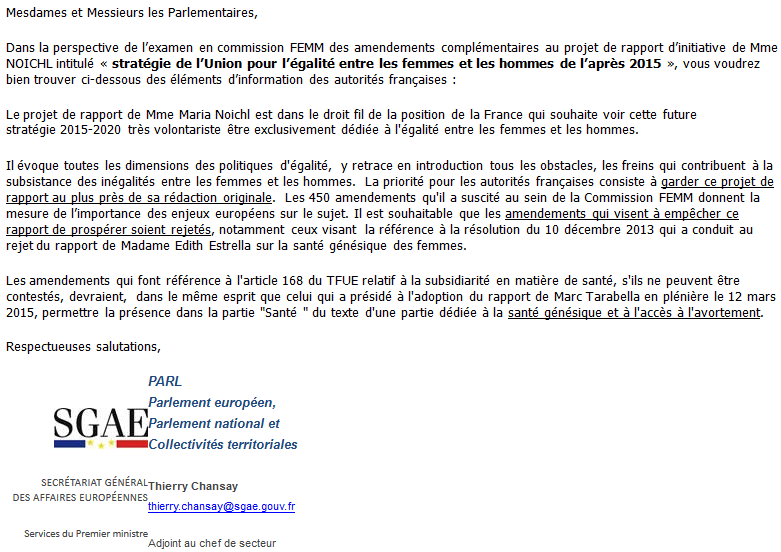 France’s injunction against European MPs on abortion: and subsidiarity?

Whilst a motion for a resolution “on the European Union strategy for equality between men and women after 2015” is currently being worked on at the European Parliament, the GSEA (General Secretariat for European Affairs) – the Prime Minister’s department responsible for European issues – is asking French Euro MPs to ignore the principle of “subsidiarity in health” to “incorporate (…)a section dedicated to reproductive health and access to abortion“.

Although the GSEA recognises the fact that “amendments that refer to Article 168 of the TFUE[1] relating to subsidiarity in terms of health (…) cannot be contested“, it specifically urges Euro MPs to pass this principle in order to develop its abortion-related policy in Europe.

In support of its request, the GSEA calls on French Euro MPs to reject references “to the resolution of 10 December 2013, which led to the rejection of Mrs. Edith Estrella’s report on the reproductive health of women“. It should be noted that this resolution of 10 December 2013 turned down Estrella’s proposal by confirming that “the definition and implementation of policies relating to health and sexual and reproductive rights as well as sex education in schools came under the competence of the Member States” as opposed to the European Union.

[1]  Treaty on the Functioning of the European Union.