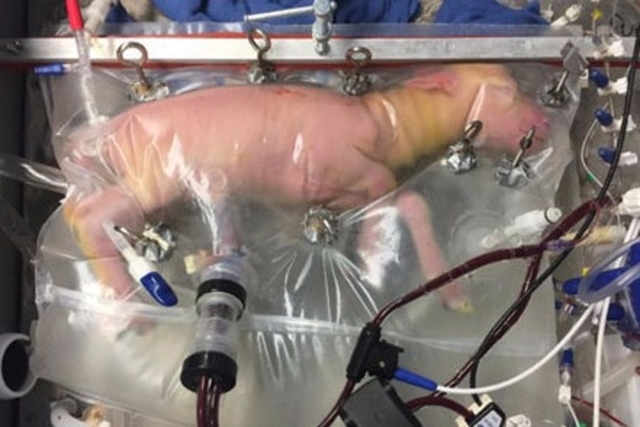 In 2017, a team of researchers announced that they had kept premature lamb foetuses alive in an “artificial uterus”. Last month, the same scientists said that they had made a “leap forward” by carrying out the same experiment with “extremely premature” lambs [1].

The device “looks like a pillowcase-sized transparent bag”. Inside, the foetus is surrounded by a “a protective bath of sterilized, artificial amniotic fluid, which is routinely filtered out and replaced”. Nutrient and drug infusions are regularly administered to the foetus intravenously. The artificial uterus “also acts as a lung”, enabling the foetus to be oxygenated.

The study published in the American Journal of Obstetrics & Gynecology reports on eight lamb foetuses at 95 days of development (out of 150 for a full-term lamb), which is equivalent to 24 weeks of human gestation. The lamb foetuses were placed in an “artificial uterus” for 120 hours (roughly 5 days) and seven of them survived. For Matthew Kemp, lead author of the study, “this result underscores the potential clinical application of this technology for extremely pre-term infants born at the border of viability“.