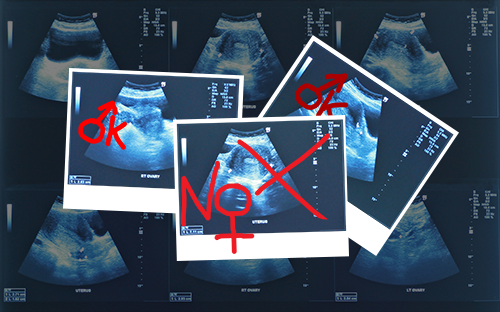 Publié le 30 Sep, 2011
Europe looked into the problem of sex selection which affects some European countries alarmingly. Indeed, Albania, Armenia, Azerbaijan and Georgia experience a net unbalance between births of boys and girls. Now we count 112 boys for 100 girls, a comparable rate to that of India or China, where this phenomenon is known for a long time. Conscious of the dangers, the Parliamentarian Assembly of the Council of Europe (PACE) adopted, on last 3rd October, the Resolution 1829 (2011) and the Recommendation 1979 (2011) condemning “prenatal sex selection“.
Selective abortions
Like UNO, PACE observes a trivialization of selective abortions in some countries. This question is particularly significant in Sweden for instance where selective abortion is not prohibited and can be performed until the 18th week of pregnancy.
If, elsewhere, sex selection of children is prohibited, in fact it is facilitated by technologies allowing determining the sex before the birth and before the legal deadline to abort. PACE underlines that this practice is an obvious discrimination and violence for women and that is contrary to the values it defends: dignity and equality of human beings. However, let’s note PACE does not challenge the selection in case of sex-linked hereditary diseases.
Paradox of a so-called “right“
The adoption of this resolution states that the abortion would never be a “right” or be authorized without restriction. Doris Stump, Swiss Parliamentarian in favor of abortion recognizes herself the perverse side effects: “in a lot of countries where abortion is yet legalized, this right is misused […] to reduce the possibilities of female births“.
Thus, in occident what is presented like a “right” allowing the “liberation” of woman, today turns against the feminist claims by discriminating the girls, because of their sex, even before their birth.