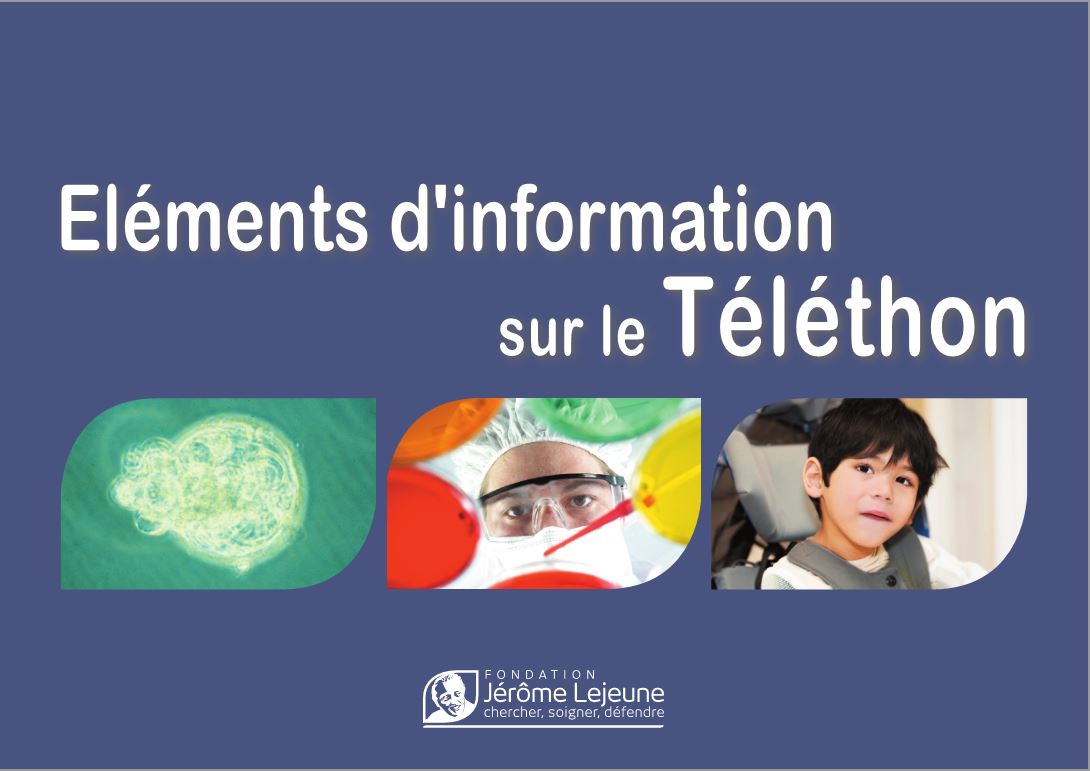 Ethical Clarification of the Téléthon 2006

2006 sees the 20th edition of the Téléthon. This year, for the first time, it will enjoy 30 hours of live television coverage. However, more and more people refuse to be involved in this vast operation that invites them to transgress fundamental rules of ethics. Without doubting the good will of many participants and the success of some of the Téléthon’s projects, we provide transparent answers to those who ask questions.

When the Téléthon rejoices in having led for the last 20 years “the battle for citizenship of people with a disability, who have long been excluded from our society “, we have to ask: to what extent is this true?

The use of embryos for research: I-STEM Centre

The selection of embryos according to genetic criteria: Pre-implantation diagnosis (PID)

In 2006, the Téléthon is congratulating itself on one of its greatest “victories” of the last 20 years: “Thanks to the genetic council and the possibilities made available by antenatal diagnosis, even families affected by disease are able to expand 3“. How far is this true?

Scientific teams financed by the Telethon select embryos using a method based on the genetic characteristics of those embryos called pre-implantation diagnosis. When a couple carries a genetic disease, an in vitro fertilisation is suggested.  The embryos obtained are separated into those that carry the disease and those that do not. Only an embryo that does not carry the disease is implanted; the others are destroyed. It was in this way that baby Valentin was born (in good health, of course); his brothers and sisters died at the embryonic stage. This declaration was the driving force of the publicity campaign for the Telethon 2000 4. Indeed, it was said that “the AFM [French Myopathy Association] has some major therapeutic successes partially to its credit 5”, notably “the birth in France of the first healthy child following a pre-implantation diagnosis (PID) 6”. In fact, children who escaped this embryonic sorting are not cured as they have never been treated – they had never even been ill. This is therefore a triple counter-truth. Public opinion was wrongly persuaded that if Valentin was in good health, it was thanks to the Téléthon.

It was through the lobbying of the State by the AFM (French Myopathy Association) that the enactment order was obtained for pre-implantation diagnosis. Eric Molinié, former president of the AFM, explained: “For example, in 1997, we adopted a resolution on pre-implantation diagnosis (PID) to demand the government to vote in the enactment orders for the bioethics law concerning PID 7”. In 2000, after the birth of the 1st baby born following PID, the association rejoiced: “this result (…) rewards the militancy of the AFM on this subject 8”.

Work on Parkinson’s and Huntingdon’s diseases involves the grafting of neural cells from aborted foetuses. In general, 3-10 foetuses are needed for one patient 9 and for the graft to succeed, these must be foetuses the neural cells of which are still alive. A trial for Huntingdon’s disease was carried out on 5 patients in 2000. Another on 100 patients began in 2002 10. From 2002, the team announced that they lacked foetal cells: “We are looking for new sources of cells for the grafts and hope notably to be able to experiment on human embryonic stem cells 11”. This research is one of the programmes highly mediatised by the association.

In December 2005, Pr Peschanski declared: “the current situation is desperate and we nearly need to envisage a commando-style operation to obtain the means to work properly on embryonic stem cells”. (Le Point 01/12/05)

In 2005 a bill demanding the authorisation of cloning for research was presented to the Senate and another to the National Assembly. This was supported by four scientists, including Pr. Peschanski who declared: “The law now needs to be changed very quickly; otherwise we will be 5 years behind. We really need this technique because it is viable 12”

In November 2005, the Office parlementaire d’évaluation des choix scientifiques et technologiques (Parliamentary Office of Science and Technology) organised public hearings with a view to compiling a report on stem cells and cloning. The introduction was entrusted to Ketty Schwartz, president of the AFM scientific council, vice-president of the administration council for Inserm and former member of the Comité consultatif national d’éthique (National Ethics Consultative Committee). She set the tone: cloning must be authorised because Pr Hwang had announced his success in Korea (the Korean results have since been recognised to be fraudulent.) During these hearings, researchers recognised that treatments would not be found through cloning, but Pr Peschanski explained that cloning was essential for the cosmetics industry: “It is the same for cosmetics; it is relatively difficult to examine the long-term effects of skin creams – particularly in well organised systems. (…) Through nuclear translocation [cloning –Ed.] from someone presenting these characteristics (…) a model could be tested by the cosmetic industry, which of course represents a considerable market. (…) Possession of these models – which are veritable human models on which these medicines or cosmetic products could be tested – is of considerable importance“.

Finally, the last argument in favour of cloning is to clone diseased embryos to better study them. It is therefore the first time in French history that doctors plan to voluntarily create sick human beings to order.

These hearings had the following objectives:

– obtention of enactment orders authorising research on human embryos as quickly as possible,

– removal of the few planned restrictions from the 2004 bioethics Law: to no longer limit research to 5 years, nor to therapeutic trials only, and no longer be subordinate to agreement for these trials in the absence of ethical alternatives,

– obtention of authorisation as quickly as possible to carry out research on PID-rejected embryos,

– obtention of authorisation for cloning in the French law.

The ‘bébéthons’ (abortion survivors) served as an appeal to public generosity

Pr. Jacques Testart had already warned that “The triumphalist staging of victories over suffering is an argument that does not correspond to scientific rigour. The Téléthon first presented myopathic children, appealing to viewers’ solidarity. After a few years, we have started to see on television the appearance of children happy to be normal, whose existence was owed, it was said, to the generosity of the public. These ‘bébéthons’ were in reality the survivors of prenatal diagnosis, which had shown them to be normal in utero despite their conception by ‘at-risk couples’ 13”.

Disabled people react to what they see as an attack against them.

“If I find out that the French Myopathy Association is going to dedicate itself to antenatal screening with a view to favouring prenatal elimination, I will immediately stop donating and being actively involved in the Association”. “I have strong reservations regarding the ‘bébéthons’ because we are made to believe that it is thanks to research that they are cured  when in fact they are the result of a selection, and therapeutic abortion has got rid of many others. This raises the question: “What if my parents had had me aborted?” I have the suspicion that scientific research is used, not for therapeutic research, but for the suppression of the sick”. “I was watching a programme on the Téléthon, when I understood. There had always been a parade of beautiful babies they call the “Téléthon miracle babies”. (…) In the book, [on the Généthon venture] it was said that thanks to progress, we could prevent children from suffering by not allowing them to be born … I was revolted to have sent money for that 14”.

The influence of the French Myopathy Association (AFM), organiser of the Téléthon, plays a major role in the research policy of the State. But this power does not have sufficient ethical weight. Indeed, the only ethical claims of the AFM are to conform to the law, even when the law does not respect human life before birth. It is enough therefore for the AFM to orientate the law according to its objectives, which it does.

Questioned in December 2005 on the criticisms by the Jérôme Lejeune Foundation of the Téléthon, Laurence Tiennot-Herment, president of the AFM, replied: “I fully understand that our work can be challenged for philosophical or religious reasons. But whether this is in reference to pre-implantation diagnosis or embryonic stem cells, the scientific teams financed by the Téléthon respect the law (…)16