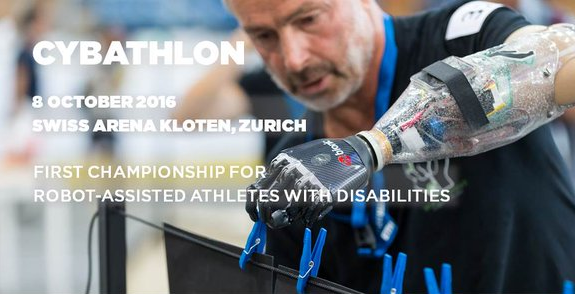 Cybathlon: a generous idea or the prelude to servitude?

While the Paralympics are coming to an end, another competition, the Cybathlon, is about to bring together disabled people, who will be confronting each other in trials carried out in symbiosis with various technological devices. The Cybathlon, organised in Switzerland in Zurich, will take place next October 8th. From a generous idea to overcome one’s disabilities, to the prelude of humanity’s subjugation to these “augmentations”, there can be many different opinions. Olivier Rey gives his own analysis of this “newly developing humanity”.

Robert Riener, professor at the polytechnic school of Zurich is a specialist of sensorimotor systems of the health, sciences and technology department. Convinced that technology has a major role to play in the improvement of the life conditions of disabled people, but aware that for the time being, the various equipment they are provided with remains insufficient, he has taken upon himself to organise the first Cybathlon in Zurich, in order to stimulate innovation in this field. For the occasion, people living with various physical disabilities will come together in competitions, in which they will have to accomplish various tasks assisted by technical devices. Six trials in all. Thanks to a leg prosthesis, people who have had their leg amputated over the knee, will try to go up and down stairs, change from a sitting to a standing position, and move around in a complex environment.

Still thanks to a prosthesis, people who have had their hand amputated will be asked to carry out tasks that require both hands. Paraplegic people will come together in a bicycle race in which their legs will be driven by functional electric stimulation; tetraplegic people will be able to control an avatar thanks to a screen controlled by the impulsions given off by their brains. Some will also be asked to follow a circuit full of obstacles in their wheelchair, while others will have to move around using an exoskeleton.

The limits of a « generous idea »

However nice the idea seems-who wouldn’t be enthusiastic about helping disabled people?-, it still has several questionable aspects:

The first one is the competitive side given to the event. Praising the disabled people who agree to use all the equipment to increase their performances, is also, in a subliminal way, the suggestion that those who don’t follow that path, simply deserve what they get.

Each team partaking in the Cybathlon is composed, as well as the « pilot » (the disabled person), of scientists and technicians: this get-together, as underlined by Riener, is also a competition that involves research laboratories and commercial companies. Speaking of which, two prizes will be handed out for each trial: one medal for the pilot and one cup for the laboratory or company that made the device. In the end, the disabled person could end up being the simple pretext for the true confrontation between the scientific and technical teams,. They would end up being simple links in the chain of various machines in competition.

Towards an augmented humanity

Over the past years, there has been more and more discussion over human enhancement, over augmented men. Augmented by technique, of course. One understands why: the human body is a promising source of growth, the new “frontier” that the capitalist economic system needs to conquer. However, most people remain cautious. What is the best way to get their consent? The most effective is through medicine. It was explained very clearly by Geneviève Fioraso, back when she was Minister of Higher Education and Research: “You cannot contest health. When you meet opposition to various technologies and you ask someone to testify, -opposition that isn’t necessarily founded, ok? I am not speaking of opposition that can be founded on various dangers- well, you ask sick people’s organizations to testify, and everybody agrees. Because it is concrete, one sees the person testifying, one sees the immediate application [1]”. Thus, myopathic children convince people to give their consent to genetic research, even though it would mostly be used to serve various other objectives than helping sick people. One can suspect that in a similar fashion, may it be deliberate or not, the Cybathlon’s purpose it to get people used to the idea that, in the future, men will live in symbiosis with machines.

“The man worth 3 billion”

Besides, the word Cybathlon is a reminder of the word Cyborg. It was in 1960 that Manfred Clynes and Nathan Klyne came up with the term, contraction of cybergenetic organism. Space exploration was just beginning and, unfortunately, human beings were ridiculously unadapted to life conditions far from earth. From there came the idea that in order to overcome these difficulties men should be amalgamated with technical equipment giving them new capabilities. In the 1970s, an American series, the Six Million Dollar Man, presented to the public in awe the Colonel Steve Austin, who, after a serious accident had lost both legs, his right arm and his left eye, all replaced by bionic prostheses (very expensive: six million dollars). Not only did Steve not suffer from any disabilities, but even better, he was more performing than an ordinary every day man. Of course, between one’s imagination of super men to reality there is a yawning gap. And precisely: one can wonder whether an event such as the Cybathlon isn’t also a way to minimize mankind. By doing this, the organisers are preparing, in the name of disabled people’s independence thanks to technique, the absolute dependence of all to this very technique.