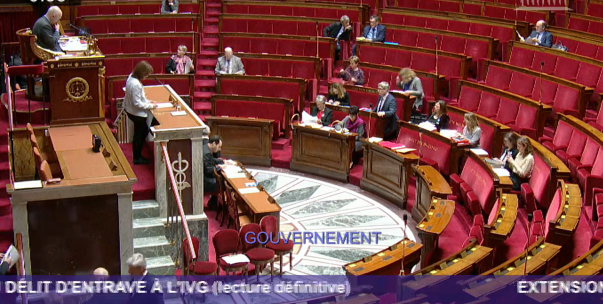 Conventional speech this morning at the national Assembly, each member perfectly playing his/her role. The outcome of the vote was clear all along. After the last intervention concerning this law, Catherne Coutelle, rapporteur of the social affairs Commission and president of the High Council for women’s equality, is satisfied, Catherine Lemorton, president of the Social Affairs Commission, chose provocation. On opening the general discussion, Laurence Rossignol, however, gladly welcomed the animated democratic debate. Still, it remained deaf to the call of the opposition that denounces a violation of the freedom of expression. It also ignored the Senate’s modification, of which the minister committed to supporting the text (cf. Criminal obstruction to abortion: the senate refreshes the text without taking-out its freedom-destroying dimension). In the end, it was buried after only a few minutes by the Social Affairs Commission the following day. (cf. Criminal obstruction to abortion: a hasty examination in Commission) A strategy using bad faith? The minister insists that “it is not conceivable to defend a right without working on removing anything that may prevent its free exercise.” The tone is given by the woman known to severely condemn opponents to abortion: “They will remain free to express their hostility towards abortion. Provided that they sincerely say who they are, what they do and what they want”, she said, before indicating, “that the cause of women had never progressed so much as in the past five years”.

Catherine Coutelle justifies the censorship of the version voted by the senate: the restored text “specifies the law very precisely” and serves 3 purposes, indicating that:

Christian Kert, a Republican deputy and only voice of the opposition, is concerned about the finality of such a text that « introduces government censorship”, thus introducing a “control of the state over the freedom of expression and thought. He adds that “it is not for the government to decide which information is legitimate and which is not”. He wonders how consulting a website voluntarily found via an internet search engine could be considered as moral pressure? He underlines the fact that there is also a serious risk of arbitrary decisions: “We are dealing with the creation of a new crime of obstruction, severely punished, which cannot be exempt from a fair and measured disposition proportionate to the deed carried out. Otherwise, it would be a violating of the citizen’s rights, protected by the Constitution”. There are “a lot of right reasons to oppose this text which will probably be censured”. He finds it deplorable “to end a mandate on a text so hastily presented”.

Just for the sake of it, Philippe Vigier, democrat deputy, spent the time he was given to speak, underlining the limits of the text, particularly concerning its application, but then insured anyone listening that his group would vote in favour of digital criminal obstruction…

After this brief discussion, the session was suspended only to reopen on a vote by show of hands that determined the text’s adoption. Tough filing a complaint now seems essential, will it be as effective as seemed to believe the Republican deputy Gilles Lurton yesterday (cf. Criminal obstruction to abortion : a hasty examination in Commission).Will the wise men and women called upon live up to their role? What a sad way to end a mandate.