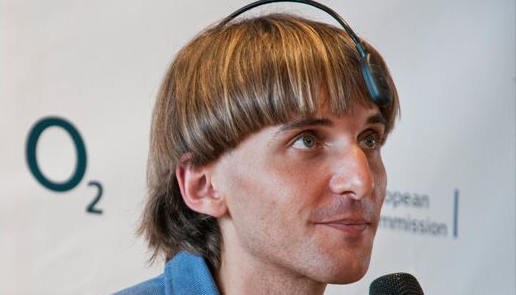 British man claims to be the world’s first “cyborg” – half man, half robot

Thanks to an antenna, which has been attached to his brain since 2004, Neil Harbisson, who was born with achromatopsia – a condition that has condemned him to seeing everything in black and white – can now see colours. A sensor was used to transform light waves into vibrations which his brain has learned to analyse. This technique is comparable to synaesthesia – a natural, albeit rare phenomenon that allows humans to perceive things using several senses at once, i.e. to hear colours and see sounds, etc.

Repaired human or augmented human? (see From “repair” to “augmentation” of human beings – where does transhumanism begin?) Neil Harbisson explains personally: “I see it as a part of my body, not a device, but an organ. I don’t wear an antenna, I have an antenna. It’s part of me”. He explains that, thanks to his implant, he can see more than tangible reality, namely infrared and ultraviolet spectra, not to mention even distant landscapes in space through the Internet connection in his brain.

The British national therefore believes he is the world’s first “cyborg” and that the number of cyborgs is set to increase. His antenna appears on his passport photo, which, as far as he is concerned, proves that the British Government recognises that it is part of him. “More and more humans see themselves as cybernetics or cyborgs(…). In the future, we will see people with organic parts, cybernetics and (…). Governments must gradually accept these changes because some of their citizens will be part-human and part-technology”, he explained at the World Government Summit – an annual forum in Dubai where discussions focus on innovation, technology and futurism.

Neil Harbisson is the co-founder of Cyborg Society and Transpecies Society, representing people who do not consider themselves as humans. Current membership figures are unknown.