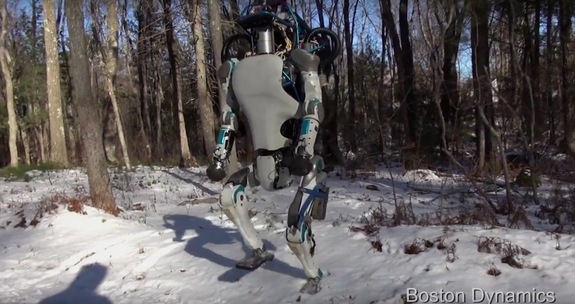 Atlas, “designed to operate inside and outside buildings”, is the result of significant challenges facing the robotics division and which many scientists have been working on for quite some time.  The robot walks outdoors and in the snow, opens doors, picks up packets and adapts to new situations.  It keeps its balance when it trips or is pushed.  And gets back up after falling down.

As far as Christine Chevallereau, Robotics Research Director at the CNRS is concerned, despite the limitations in terms of noise and energy consumption, the robot “is very impressive”. “Real progress has been made in terms of robustness. It manages to carry out relatively complex tasks unprompted”. Although this is only a video and there are few obstacles in the robot’s path, the scientist nevertheless emphasises that Atlas is being developed “in a virtually normal environment, which does not resemble laboratory conditions”.  This highlights the progress made in the field of robotics and potential opportunities.