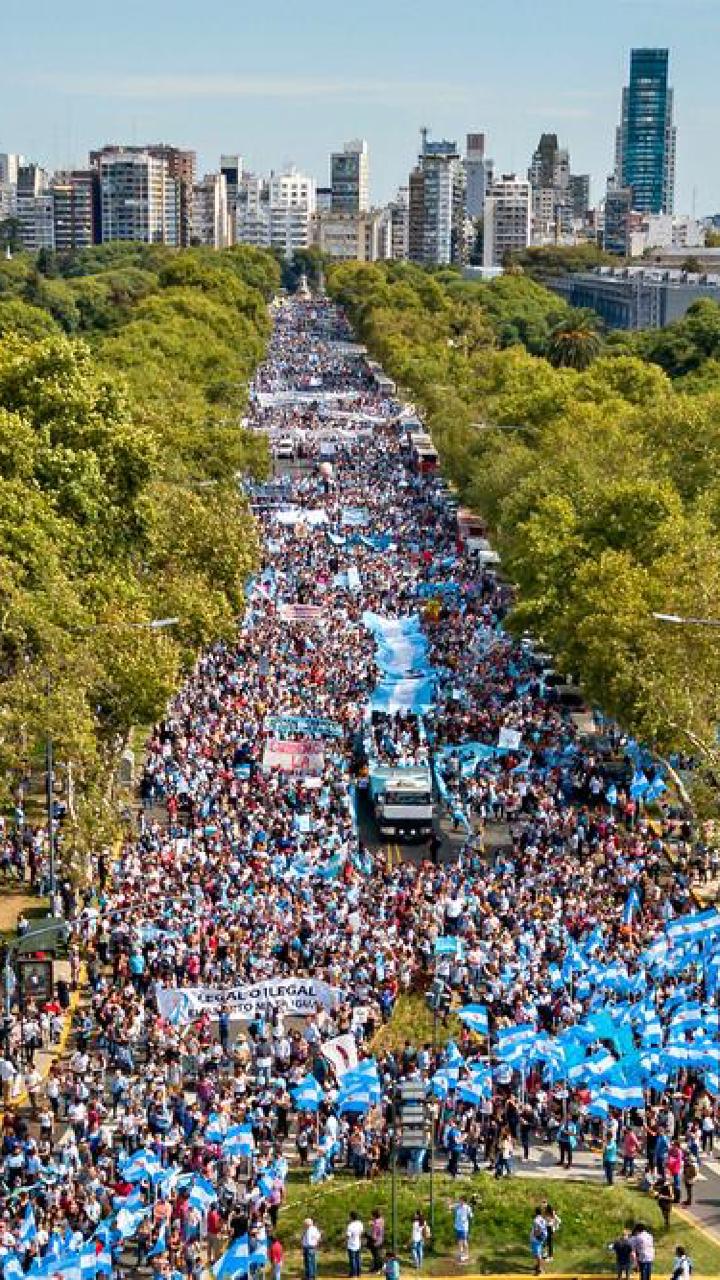 2,400,000 people in Argentina demonstrate against abortion

According to the organizers, 300,000 people were in the streets of Buenos Aires last Saturday.  Other Marches for Life were also organized in 200 cities across Argentina, “with the total number of participants in the country’s various marches coming to 2,400,000 people”.

Before the crowd of mainly young people gathered on Avenida del Libertador, the organizer of this Marcha por la Vida, Alejandro Geyer, explained that “this march is calling us to carry on defending three major principles: the life of unborn children, the right of families to freely educate their children far from gender ideology, and awareness that we are in an election year. We are therefore going to decide on the future of our homeland, our families and millions of unborn children”.

The co-organizing groups included Marcha por la Vida [1], +Vida [2], Argentina Pro Vida [3], Red Federal de Familias [4], Médicos por la Vida [5], Abogados por la Vida [6], many student groups, the president of the Argentine Episcopal Conference, the Christian Alliance of Evangelical Churches in Argentina (ACIERA), etc., which are all united in calling for the 2015 protocol to be repealed. This protocol for the comprehensive care of persons entitled to legal termination of pregnancy (ILE, standing for Interrupción Legal del Embarazo) allows some abortions. The associations confirmed their opposition to the bill rejected by the Senate last August (cf. Senators in Argentina refuse to legalize abortion). Finally, the organizers threatened candidates in the forthcoming elections, saying they would not vote for those who want abortion legalized. A helpline will be available from April onwards for pregnant women in difficulty. It will be funded entirely by associations supporting women with pregnancy-related problems. We are “determined to take to the streets as many times as necessary to protest against the government’s policies, which clearly run counter to life,” added Alejandro Geyer.

“Enough with easy solutions, we demand public policies that save both lives” and “Pro-abortion? I’m not voting for you!” could be read on the placards. With blue scarves around their necks, the demonstrators chanted slogans such as “No to abortion, the people say. Yes to life, Mr President”.

Eduardo Vicente Mora, the 73-year-old dean of the faculty of veterinary science, acknowledged that he was very moved to see “how many young people had taken part in the march. The important thing is to defend both the mother’s and the child’s lives”. The spokespersons for ACIERA added that “no one can decide who has the right to live and who does not. The state must be on the side of both lives; there is the same obligation to protect the fundamental right to life for both sides”. For Raúl Magnasco from +Vida, this event was “a celebration for the Argentine people, who love marching as a family in support of both lives”.

On Sunday, several thousand demonstrators also marched through the streets of Madrid, the capital of Spain, to the sound of slogans such as “Yes to life”, “Young people united in the fight for life”. They released hundreds of green balloons “in memory of unborn children”. The demonstration, “which passed off in a festive atmosphere”, was initiated by the “Yes to Life” organisation.

[4] The Federal Network of Families