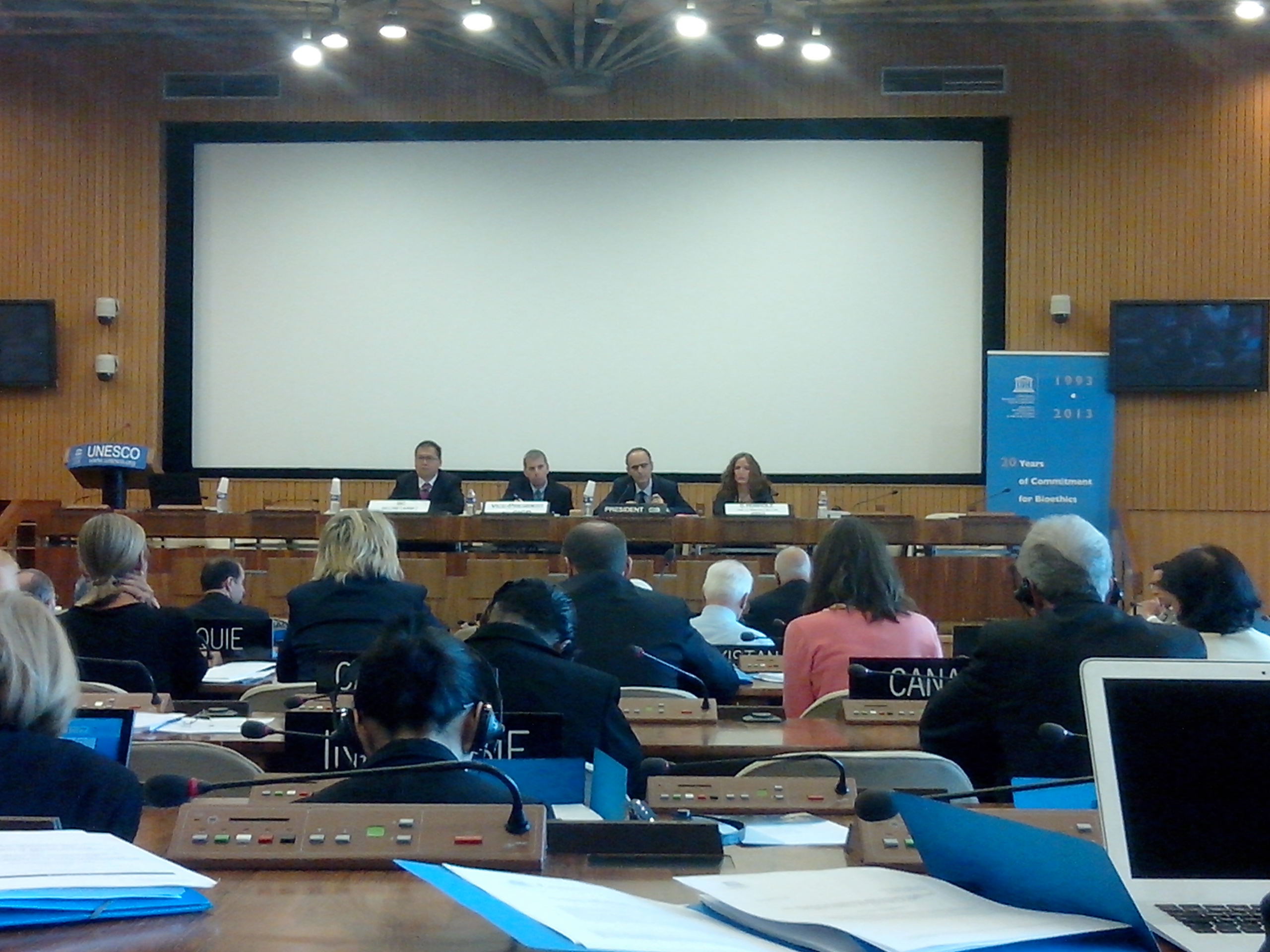 On 9 and 10 September 2014, Gènéthique attended an important event focusing on international reflection addressing bioethical issues at the Paris headquarters of UNESCO: the 21st Session of the International Bioethics Committee (IBC) and the Joint Session of the IBC and the Intergovernmental Bioethics Committee (IGBC). The IBC is the only international think tank addressing bioethical issues. It is made up of experts (technical approach). The IGBC comprises representatives from Member States (political approach).

Two main topics were discussed during the session:

The elaboration of the principle of the sharing of benefits as set out in article 15 of the Universal Declaration on Bioethics and Human Rights (2005). Based on the fact that sharing is a costly approach, the IBC also questioned the following two aspects: is there a right of access to scientific techniques? Can intellectual property rights and individual rights to access health services be ranked in order of importance?

An update on the IBC’s reflection on the human genome and human rights is a topic of particular interest to Gènéthique. In fact, several techniques (prenatal diagnostics, three-parent IVF, etc.) raise basic recurring ethical questions. The following four topics were selected to broach this update: genetic tests directly accessible to consumers (problem of interpreting the results), mitochondria donation indicating “three parent IVF” (already carried out in Great Britain), the protection of genetic data covering the open access issue and lastly, so-called “therapeutic” human cloning. In preparation for this public session, two working parties issued their concept notes (1) and (2), to provide the basis for dialogue. This event has paved the way for a 2-year period of consultation and dialogue.

Dafna Feinholz3, Head of UNESCO’s Bioethics and Ethics of Science Section, answered Gènéthique’s questions to enlighten readers about the scope of the work being undertaken.

1. What is the International Bioethics Committee? When and why was it created?

UNESCO has been involved in bioethics since the 1970s and officially launched its programme in 1993 with the creation of the UNESCO International Bioethics Committee (IBC), coinciding with major human genome discoveries. The IBC is an intellectual forum for reflection, bringing together experts from different parts of the world with different disciplines (life sciences, social and human sciences, education and communication) and cultures as well as varying ideology, all of whom are governed by the Human Rights Charter. It works on defining the universal principles of bioethics. The IBC and UNESCO’s Bioethics Programme work to promote international and national debate on major ethical issues arising from new knowledge acquired and applied in the field of life sciences with a view to drafting a standard framework that can be shared by the international community via our Member States.

The IBC is a body comprising 36 independent experts appointed by the Director General of UNESCO, all of whom serve a four year term of office. It is the only international reflection forum addressing bioethical issues. Its members work together to guarantee respect for human dignity and freedom. The tasks of the ICB include:

a) Promoting reflection on ethical and legal questions raised by research in life sciences and the application thereof;

b) Heightening awareness amongst the general public, specialist professions and public and private decision-makers involved in bioethics;

c) Co-operating with governmental and non-governmental organisations focusing on bioethical issues as well as with national and regional bioethics committees and related bodies;

d) Contributing to the dissemination of the principles stated in UNESCO’s Declarations in the field of bioethics and investigating issues raised by their application and changes in relevant technologies.

The Director General of UNESCO meets with the IBC at least once a year. Through its sessions and working parties, the Committee makes decisions and recommendations on specific questions which are adopted by consensus and are widely circulated and submitted to the Director General for transmission to Member States, the Executive Board and UNESCO’s General Conference.

2. How are the topics broached during each session actually chosen? Genetic tests in particular were discussed in Paris mainly from the angle of the marketing of tests via the Internet and their controversial interpretation: similar to discussions of prenatal tests (pre-implantation and pre-natal diagnostics), which are currently in the headlines

The two main topics discussed in our meetings last week were firstly, article 15 of the Universal Declaration of Bioethics and Human Rights (UDBHR), i.e. the “sharing of benefits”, and secondly, an update on reflections addressing human genomes.

The definition of these topics was discussed in the concluding session of the 20th meeting of the IBC held in Seoul in June 2013, and subsequently developed in our programme of work. It is important to note that the IBC works independently in drawing up its working programme.

The decision to focus on article 15 of the UDBHR follows our current line of work examining the precision of the contents of UDBHR articles in order to translate these bioethical principles in the political agendas adopted by Member States. Furthermore, given rapid advances in the fields of genetics and genomics, the IBC decided that it needed to update its reflections on the question of genomes and human rights basing its deliberations on the considerable amount of work completed on this topic by the Committee in the past and, in particular, by taking into account the Universal Declaration on the Human Genome and Human Rights of 1997, the International Declaration on Human Genetic Data of 2003 and the UDBHR of 2005.

With regard to the human genome and human rights, it should be noted that, in private IBC meetings, the decision was taken to examine a broad range of issues in the future, including non-invasive prenatal diagnosis.

As regards the revision of the Recommendation on the Status of Scientific Researchers (1974), a decision was taken at the 37th UNESCO General Conference to instigate a revision process in consultation with the Member States and other partners over a four-year period from 2014-2017. The inclusion of this item on the agenda ensures that the participation of both committees will be taken into consideration in this consultation process. With regard to the ethical aspects of converging technologies1, it should be emphasised that this was the ideal opportunity to inform and include the IBC in broader discussions currently debated within the international community. The Committee also exchanged ideas on the intention to strengthen its support to co-ordinate members of the United Nations Inter-Agency Committee on Bioethics (UNIACB) concerning the ethics and governance of converging technologies in order to contribute to the development of fairer societies.

3. What are the IBC’s definite goals and how do these interlink with UNESCO’s global strategies?

We have outlined the IBC’s goals. In more practical terms: the Committee makes decisions and recommendations on specific questions which are widely circulated and submitted to the Director General for transmission to the Member States, Executive Board and General Conference. Links with the IBC nurture all activities with a view to boosting UNESCO’s capacities in terms of bioethics in order to strengthen national bioethics committees and promote bioethics education. These actions are consistent with UNESCO’s general objective to support inclusive social development, the promotion of intercultural dialogue to bring together cultures and ethical principles, by Member States in particular, authorising the management of the ethical, legal, environmental and social implications of scientific and technical challenges with a view to creating social, inclusive and sustainable development.

3) Dafna Feinholz, Head of UNESCO’s Bioethics and Science Ethics Section, has a Doctorate in Psychology from the Mexican University of Iberoamericana and a Master’s Degree in Bioethics from the Complutense University of Madrid.  At UNESCO, Dafna Feinholz leads various activities aimed at strengthening the capacities of Member States to manage bioethical challenges and to identify the ethical, legal and social implications of state-of-the-art science, emerging technologies and their application to ensure sustainable development.